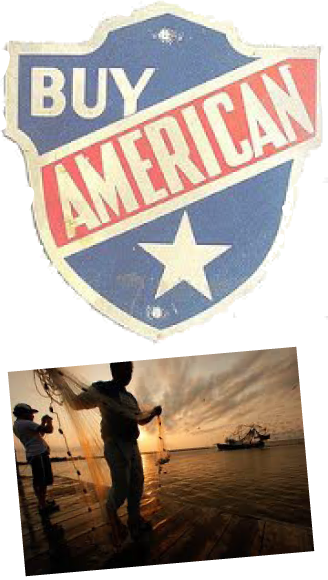 WHY BUY ANY OTHER KIND OF SHRIMP?

Why is buying American shrimp so important? Plain and simple, it’s the right thing to do. Consider this type of loyalty as a two-fold patriotic duty by consumers and suppliers who both support the heritage-laced effort for an American product that is harvested from the nutrient-rich waters of the Gulf and South Atlantic. From the dock to the plate is the American way, whether it’s served in your home or local restaurants.

Wild American shrimp are caught by shrimpers off the Gulf and South Atlantic coasts. To be more exact: Texas, Louisiana, Mississippi, Alabama, Florida, Georgia, South Carolina and North Carolina. The shrimp naturally thrive in these waters, and their presence has influenced a way of life in these states. Instead of being scooped from a pond and shipped over on a container vessel, Wild American shrimp are pulled directly from their natural environment, delivered to the dock, then to your table. They meet strict U.S. environmental and food regulation standards, and they’re certified to assure quality.

In addition, the taste of wild-caught shrimp is unrivaled. It’s all about the nutrient-rich waters that border the coastline of these eight states. There’s just really nothing like it. The pristine waters of the Gulf and South Atlantic are embedded with a unique flavor profile that is absorbed into shrimp to provide an unmistakable, robust taste.

Consider these two bodies of water like an enormous salinity pool of natural seasoning — thousands of miles teeming with succulent shrimp that are clean and sweet all because they are harvested from a natural environment free from harsh chemicals. Also, wild shrimp feast on a wild diet, which only enhances the taste and provides a high quality product that is truly matchless in flavor.

It’s well known that shrimp ranks No. 1 as the most popular seafood in the world, and for good reason. Not only are Gulf and South Atlantic shrimp laced with palatable flavor as a result of their natural habitat, the nutritional value and health benefits of these tasty crustaceans are impressive. Shrimp are low in fat, low in calories, have zero carbohydrates and zero sugar, and are significantly high in protein.

In addition, the antioxidant support in shrimp is great for the body, thanks to two unique properties: astaxanthin, which is the color pigment in shrimp responsible for their red, pink and orange hues, and the mineral selenium. Other nutritional elements in shrimp include Vitamin D, B12, B3, iron, copper and zinc.

Of course, once chefs get their hands on the indigenous and sustainable product, seafood is taken to another level and transformed into an array of delicious dishes. Whether they are paired with a touch of this, a dash of that, or a toss in a savory sauce, wild-caught shrimp are in a culinary league of their own.

Buying Wild American shrimp also shows support for the story-laden heritage that can be traced along the Gulf and South Atlantic coasts. Generation after generation of fishing families and seafood entrepreneurs have poured their lives into the foundation and ongoing continuation of a thriving seafood industry that serves as a beacon of history full of stories penned by family legacy.

The rich waters of the Gulf and South Atlantic are blessed with a renewable resource that can be harvested over and over again. When patrons buy American shrimp, it not only supports all those involved who ensure wild shrimp reaches the plate, it’s also a patriotic commitment that helps strengthen the economy of the red, white and blue.

To fishermen, past and present, we salute you. To seafood processors and distributors, we appreciate you. To restaurants and caterers committed to serving wild-caught shrimp, we thank you. To consumers who support the “buy local, eat local” concept, we applaud you.

Buy American shrimp — it’s the right thing to do.