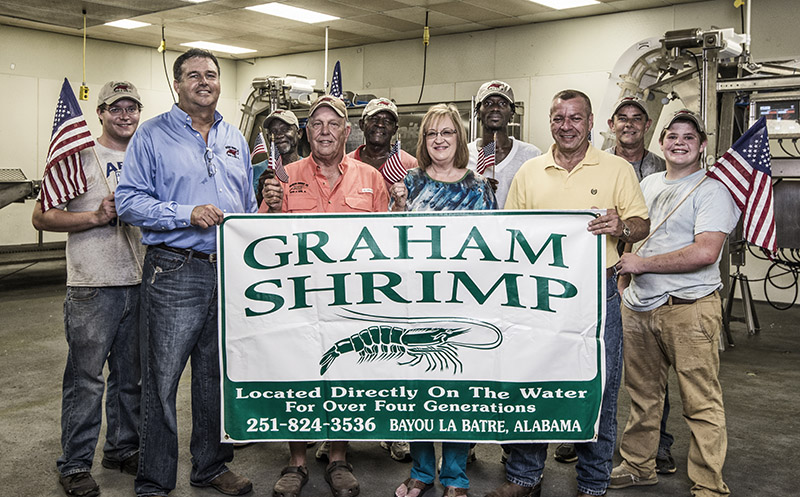 Bayou La Batre, Alabama is a land of opportunity fueled by the bounty of the Gulf of Mexico, as Ernie Anderson and his father-in-law Steve Graham of Graham Shrimp Co. Inc. will tell you after four generations of success in the shrimp and seafood processing industries. Through hard work and honest living, the faces behind Graham Shrimp have made a name for themselves both locally and nationally by catering to customers’ needs, making smart investments, and simply doing good old-fashioned hard work.

Their story begins in the 1940s, when Steve’s parents Mr. Willie (Louis Wellington Graham) and Mrs. Olivet Graham traveled to Mobile from Coden, Alabama, by train, selling crabmeat to long lines of hotel patrons who were mostly from the northern U.S., at the Rolston Hotel. Olivet was known as a tough woman with a particular skill for picking crabmeat, who passed that skill on to countless others. A former Collier of Dauphin Island, Olivet had already dipped her toes into the industry, having also worked in a shrimp and oyster cannery.

On one of their trips, Mr. Willie and Mrs. Olivet struck gold when they encountered a friend, a salesman for a car lot in Mobile. The man told Willie he’d probably be able to “get around more quickly and sell more crabmeat” if he had a truck. The only problem was that Willie didn’t have a driver’s license. So the enterprising car salesman helped Willie acquire his driver’s license, and the rest is history. Also, it was at this time that Louis Wellington Graham became legally known as Willie Graham since his friends and others had always known him only as Willie.

Ever the forward thinker, Mr. Willie became a pillar of Bayou La Batre when he “went out just like Columbus” and pioneered the harvesting of brown shrimp from the Gulf of Mexico around 1947 or 1948 on his boat, Morning Star. Exploring Lake Bond, Mobile Bay, and beyond, Willie’s discovery of brown shrimp farther into the Gulf revolutionized the shrimp industry, adding a bountiful new variety to the white shrimp product already available.

Want to learn more about Graham Shrimp Company? Be sure to visit their Member Page and website for more information!