If You Can’t Stand the Heat, Get Out of the WFC Kitchen

On Thursday, November 9, I had the opportunity to attend the World Food Championships. The competition is separated into different ingredient or food categories from bacon and steak, to seafood, BBQ, and even dessert! Wild American Shrimp sponsored team Layers of Flavor lead by Executive Chefs James Aptakin of the Turtle Bay Resort North Shore in Oahu, Hawaii and Michael Dibuono of Fernwood Country Club in McComb, Mississippi. In 2016, Chef James took home the top prize in the seafood category and won second place in the entire competition! Held at The Wharf in Orange Beach, Alabama, it was a beautiful but chilly day for an outdoor cooking competition, hence my boots.

Don’t think for a second this was some tiny space

with a few hot plates and sauce pans.

No. The World Food Championships are a major culinary throwdown featuring more than 450 of the top chefs in the world competing for a $100,000 prize. There were approximately 50 kitchens under the main tent, all outfitted with brand new, high-end ovens, grills, portable gas stoves and Gotham Steel® pots and pans.

During the competition, each chef had two hours to complete a structured dish and a signature dish. All competitors had to put their spin on one type of dish for the structured build. In the case of seafood, it was Oysters Rockefeller featuring fresh oysters straight from the Gulf of Mexico. Their signature dish was a Vietnamese spring roll stuffed with Wild American royal red Shrimp. Our chefs got their game faces on and started preparing their dishes. 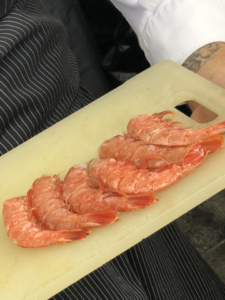 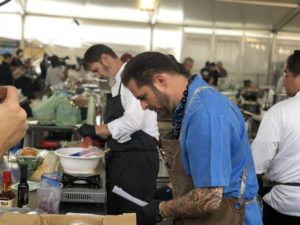 It was amazing to watch this team dancing around one another within a 12’ x 12’ space full of equipment. One member of their team was 17-year-old Adrian who originally met Chef James during his trip with the Make-a-Wish Foundation. He suffered from leukemia and his wish was to one day become a chef. Under the wing of Chef James, Adrian’s dream came true, and boy has he soared! Chef James was so impressed with Adrian the first time he met him that he invited him to come and compete with him at the World Food Championships.

During their dish preparations, Chef James took the time to train Adrian even under the high stress and stakes of the competition. It was emotional to watch his patience with Adrian and you just knew that the $100,000 grand prize was the absolute last thought in his mind. His goal was for this young man to have the experience of a lifetime whether they moved on in the competition or not. 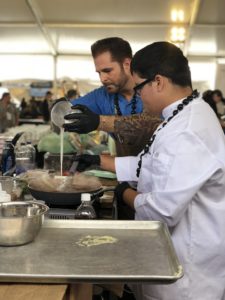 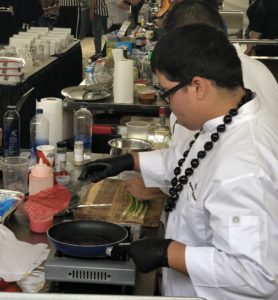 Turns out, it was a good thing Adrian was there. With literally 3 seconds remaining on the clock, Adrian fixed one of the presentations that fell just prior to the tray being set on the judges table. Once a tray is placed on the table, it cannot be touched again. 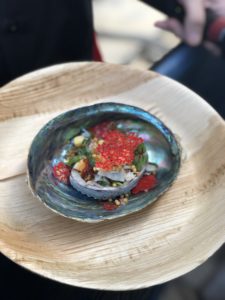 At 7 pm, it was time to hear who was moving on to Saturday’s round of Seafood competition. Only the top ten are awarded positions to move on. Chef James’s team was named 8th place out of ten so they will have the opportunity to defend their title as THE BEST Seafood Chefs in the world. Here’s the best part – two pounds of Wild American Shrimp compliments of Eat Alabama Seafood must be incorporated into their structured dish! Once we know the results, I’ll post an update! 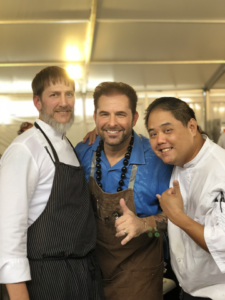