with Smoked Serrano’s, Sweet Potato, Mango and Tostones with a Cilantro Lime Aioli 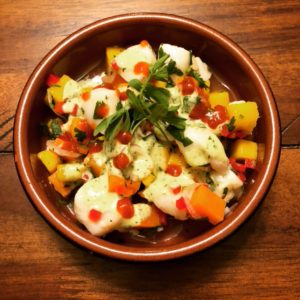 the gulf (head and tail on)

Clean the Ruby Red’s by removing heads, shells and tails. Butterfly the backs to remove waste line. Clean any waste that is left over and discard. Cut Ruby Reds into thirds and place in a mixing bowl.

Squeeze the juice from the orange, lemon and limes and put into bowl of shrimp. Place bowl in cooler while we prepare the other ingredients.

Clean the sweet potato under water and place into medium soup pot with water to boil for 4 minutes and put into ice bath. Remove sweet potato from ice bath to dry.

With a mandolin thinly shave the shallot and radish then put into separate bowls.

Remove skin from mango and dice discarding the core.

Remove skin from sweet potato and dice. Put into bowl and toss.

Put oil in skillet and fry plantain chips until golden in color.

In a serving dish spoon in mixture, drizzle cilantro lime aioli over top and put 2 or 3 slivers of radish. Serve with tostones.

Combine egg yolk, garlic, lemon and lime juice in the bowl of a processer. Process for 10 seconds with the processer running take EVOO and “slowly” drizzle into mixture until mixture has emulsifies. Be sure to do this part slowly otherwise mixture will separate.

Once mixture has emulsified and you finished all the oil, add cilantro and pulse “10” times to integrate the cilantro. Add salt and pepper to taste.